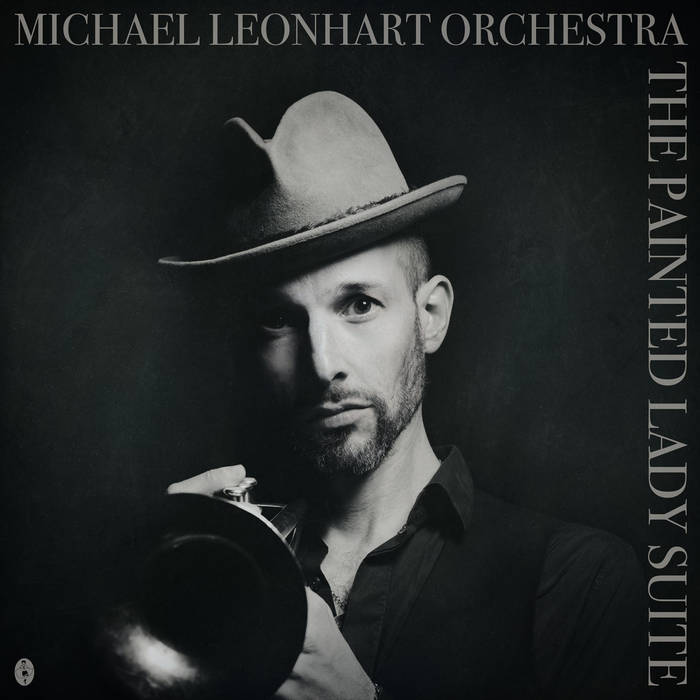 The Painted Lady Suite, the debut album by the Michael Leonhart Orchestra (MLO) is inspired by the butterfly of the same name. While Leonhart was initially attracted to its flamboyant coloration and wing ornamentation, it was the butterfly’s incredible migration, which spans over six generations and 9,000 miles — twice that of the Monarch butterfly, that inspired the trumpeter/composer/bandleader to write his “Painted Lady Suite.”

Leonhart’s path toward the creation of MLO began in his youth. Born into a musical family, Michael was fascinated by orchestration, composition and counterpoint by the age of 10. “I remember my mother playing all these amazing albums in the house growing up: the Miles & Gil Evans’ collaborations, Ellington Suites, Sinatra & Nelson Riddle, Quincy Jones and tons of Thad Jones/Mel Lewis,” Leonhart recalls. “While my dad Jay was out playing gigs and recording, it was my mother’s DJ’ing that was the ‘gateway drug’ that led me to discover Stravinsky, Ravel, Olivier Messiaen, Morricone and David Axelrod.” Leonhart has worked for decades as an accomplished trumpet player, arranger and composer, but it was when he took on the role as arranger/conductor for the 21-piece orchestra on guitarist Nels Cline’s eclectic Lovers album (Blue Note, 2015) that his love of conducting, arranging and composing for large ensemble was reignited. Once the album was finished, Leonhart was certain that he wanted to create a solo project in this vein, and thus the Michael Leonhart Orchestra was born.

“When creating MLO, my idea was to get an all-star mix of soloists, ensemble players and pocket-players who would be as comfortable playing Mingus and Ellington as they would be playing Wu Tang and Fela Kuti,” Leonhart says. “It was also important to me to steer clear of the traditional ‘big band’ instrumentation and have bassoon, accordion, bass harmonica and strings.” The Orchestra is comprised of a roster of some of the most sought after musicians in New York, including members of the Village Vanguard Orchestra, Maria Schneider’s Orchestra, the Dap-Kings, Menahan Street Band and Antibalas. Working with these stellar musicians has given Leonhart the invaluable opportunity to workshop new arrangements of existing material, covering such artists as The Beastie Boys, Zappa and Bernard Herrmann, and new original compositions, building the repertoire in front of a rapidly growing audience.

The Painted Lady Suite is broken into two parts with seven movements, which sonically parallel two separate migrations, one over North America into Canada and the other from the Arctic Circle over Europe into Northern Africa. Leonhart assigns different instruments and specific soloists to represent the changing climate and mood of the migration. The sonic migration begins with a mutating 21-bar phrase played by brass and woodwinds blending with violins and bass melodica as the chrysalises are shed and the butterflies take flight. Leonhart says, "While composing the suite, I knew that Donny McCaslin would be one of the featured soloists I would be writing for. Donny is the sonic equivalent of a 1965 Shelby Cobra 427 race car. He has the rare ability to seamlessly build a solo from '0 to 60' in seconds while commanding the listener's focus as 20 plus musicians play full volume behind him." McCaslin's tenor is featured as a wordless narrator as the swarm heads north from Mexico; Sam Sadigursky’s tenor takes over as the lead voice as the swarm continues north, supported by Nels Cline’s undulating guitar volume swells. The hypnotic beat of the huge swarm flying over Texas is orchestrated for the Dap-Kings rhythm section, utilizing drums, bass and analog electric drum machine. Leonhart’s fearless choice of uncommon instrument combinations harkens back to Morricone, Quincy Jones, David Axelrod and Nino Rota. In the second half of the suite, the cold expanse of the Arctic Circle is represented by wordless voice, harmonica and Mancini-esque bass flutes, along with the “buzz wow” muted trombone of Ray Mason and clarion trumpet of Dave Guy.

The journey of the Painted Lady butterfly parallels the story and development of the Michael Leonhart Orchestra and The Painted Lady Suite — a large group takes a journey utilizing the past generations’ wealth of knowledge and arrives triumphantly in a kaleidoscopic array.

In addition to the Suite, the album features three of the earliest compositions Leonhart wrote specifically for MLO. “In the Kingdom of MQ” is a swaggering march featuring an electrifying solo by Donny McCaslin and is a tribute to Leonhart’s young son. Alternating between a 12/8 burlesque groove and a ¾ church feel, the jaunty “Music Your Grandparents Would Like” is the kind of jazz and rock hybrid Zappa would have loved, including a hard left turn as Nels Cline delivers a brain-melting solo. Lastly, “The Girl From Udaipur” establishes a trance-line ostinato with wordless choir as solos by Ian Hendrickson-Smith and Jay Leonhart bring the recording to a close.

Bandcamp Daily  your guide to the world of Bandcamp

outré black metal, with a Victory Over the Sun interview and music from Liturgy and Jute Gyte.